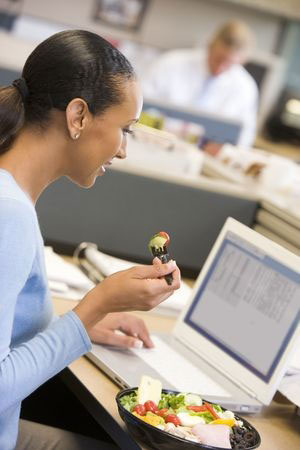 Healthy school lunch initiatives have gone from idea, to law, to political brouhaha. The movement toward an American food culture that embraces healthier lunches and smarter protein choices may have started in the school cafeteria, but it certainly hasn't stopped there. High-level attention is being paid to fighting the epidemic of obesity among America's children and its adults.

The impetus for healthier lunches—in our schools and for our nation's legion break-skipping, deskside mealtakers—is simple: as developed nations go, the incidence rate of diabetes and other obesity-related illnesses in the United States is tremendously high.

Could Eating Lunch At The Wrong Time Be Contributing To Unnecessary Food Waste?

Moreover, students who ate after recess ate 45 percent more fruits and vegetables than their counterparts. Why? The Washington Post's Roberto Ferdman suggested there are two reasons.

First, kids play hard and are naturally hungrier after doing so. But they also tend to rush their food intake, if recess comes after lunch, in order to gain more time on the playground. Children who eat after recess have less incentive to scarf down a piece of pizza and dump their spinach and fruit cocktail if additional playtime isn't in jeopardy.

When children perceive that they have more time to eat, they will.

Is The Same True Of Desk-Side Eaters?

One must naturally wonder. Do deskside diners also waste more food than their break-taking brethren? We can’t say for sure, but they certainly aren't eating up restaurants' perishable stock.

As NPR noted, the fact that more workers these days aren't stepping away to go grab a bite has hurt many restaurants and lunch counters that depend on the noontime trade. In their lack of success luring diners away from work, restaurants undoubtedly find themselves with a lot of unused ingredients on their shelves and in their refrigerators. That food doesn't stay good forever.

And employees who do eat at their desks forego the exercise that kids at recess enjoy, too. That daily ten minute walk each way from desk to diner does wonders for a waistline, compared to choking down a heavily-processed meal and continuing to click away on a keyboard.

If restaurants were better able to attract diners—and if more employers were more willing to allow ample time—for luncheon, we could simultaneously fight the obesity epidemic and increase food industry profits. Remember those kids who were hungrier after recess? The employee who has to walk to grab lunch might just go ahead and shell out for a side salad to go with his or her burger.

Some quick-service restaurant (QSR) companies think so. This year, White Castle launched its new Veggie Sliders to decent fanfare—especially among the key Millennial demographic. Burger King, too, has sought to distance itself from its former Home of the (incredibly unhealthy) Whopper branding; it has diversified its menu to include fish, grilled chicken and, yes, a Morningstar veggie burger.

And the fast-and-fresh sector has done an amazing job of proving that, given the option, lunchers will flock to the best available protein. Chipotle, in particular—a brand that has made a name for itself in its insistence on offering responsibly-raised protein— has reported double-digit same-store sales growth last year.

So can other restaurants and food companies cash in by moving toward better protein offerings? Can they bring in the hungry masses at lunchtime? It certainly couldn't hurt to try.