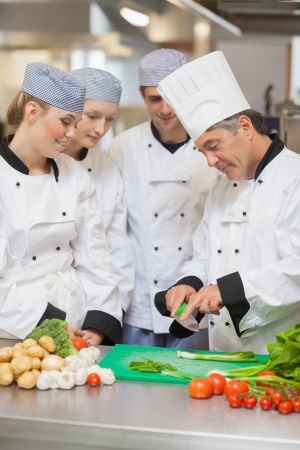 What is Sous Vide?

Sous vide, or low-temperature cooking, was first developed in the 1960s as a way to prepare industrial foods on a large scale.

By the 1970s, the cooking technique had found its way into gourmet French kitchens. Sous vide, which means “under vacuum” in French, is the process of cooking food in airtight plastic bags in a water bath or at a tightly regulated temperature lower than what is normally used for cooking. In most cases, food is cooked at the temperature it will be served at.

The point of the sous vide method is to cook food accurately and evenly.

Essentially, this technique traps all of the juices and flavor that would have seeped out in traditional cooking methods. The food retains moisture and aroma, resulting in better texture and greater succulence.

While sous vide has long been used in gourmet restaurants by chefs such as Ferran Adria and Joel Robuchon, Suchef, a healthy fast food concept, plans to open three sous vide restaurants in London in July 2014.

It is only a matter of time before the trend finds its way to the United States.

The lunchtime market is divided into two types of people: those who make their lunch at home and “brown bag it” and those who purchase their lunch out.

For those people who buy their lunches, cold sandwiches, subs, and fast food dominate the market —there are over 300,000 fast food restaurants in the United States alone—despite the recent trend toward more conscientious eating habits. According to Anna Konieczny, Suchef’s brand manager, with a target demographic of health-conscious young professionals who are pressed for time, Suchef will fill the void between healthful eating and fast food.

“Suchef is mainly set up for people who want to take their food out,” says Konieczny, “it’s a healthy fast food concept that brings high-end cuisine to the everyday.”

At the new London restaurant, customers will be able to choose a main dish like chicken or plaice and salmon roulade, as well as a vegetable, side (such as brown rice or quinoa) and receive their meal in a wait-time comparable to the typical fast food establishment.

An emphasis on locally sourced and produced ingredients, organic food and a farm-to-table philosophy are just a few of the components currently rebooting the food system. In fact, farm-fresh, farmers market, and farm-grown claims have grown 80 percent on menus over the past three years. The food service industry is a large part of that system, and that is why places like McDonald’s and other fast food giants have developed and marketed healthier, low-calorie foods.

It's not revolutionary that fast food restaurants are changing their menus to keep up with current food trends —that’s just good business. However, what is revolutionary is that the “concept” of fast food is changing, and with that change comes ideas like Suchef and mainstream sous vide style cooking.

As the food service industry continues to change with current health food trends, it is only a matter of time before sous vide enters the U.S. market in a more fast-food-friendly way. Dominated by behemoth chains for too long, the takeaway lunchtime market in the United States needs an alternative.

Why not add a boost of flavor with a concept from the Old Country?