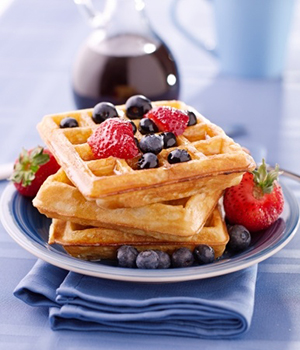 Savory waffles for dinner? A three-egg omelet for lunch? Absolutely— just don’t forget the side of bandito loco spicy coffee beef jerky or savory bacon coconut chips. Breakfast all day, every day is one of the top trends in the food industry, according to Grocery Headquarters. Consumers are craving their all-day breakfasts, and like all their foods this year, they want great taste, a sense of adventure, and a decided healthy glow, too, says Denise Purcell, editor of Specialty Food Media.

Last year’s trend towards healthier whole foods will continue to influence consumer behavior in 2015, predicts Grocery Headquarters. This means an emphasis on fresh, whole foods over processed foods with preservatives and additives and a demand for plenty of ancient grains like quinoa or amaranth and gluten-free foods.

In response to the demand for increased gluten-free options, the British food company Morning Foods unveiled its new certified Gluten Free Oats range. Morning Foods is a first-to-market launch for a mainstream oat brand. The brand's offerings feature a wide range of gluten-free options, including porridge oats and pinhead oatmeal. Morning Food is not just marketing the new line to individuals with celiac disease, but to all consumers interested in a healthier lifestyle. For example, the company is also marketing its gluten-free oats as a healthy alternative baking ingredient.

General Mills and Kellogg, both under fire earlier in January for including the synthetic antioxidant BHT in its cereal packaging liners, announced they are testing alternatives and “already well down the path of removing it.” Despite being FDA-approved, BHT has been linked to cancer and developmental effects in animals, according to the Environmental Working Group, and is not currently included in cereal packaging in Europe. This move reflects consumers’ continued preference for natural, whole foods, reports Food Navigator USA, and remains one of the hottest trends in the food industry.

Once a one-off novelty, food trucks now comprise a $1 billion industry and are proving hot competition for quick-service restaurants (QSRs), especially in the area of breakfast.

With items ranging from scrambled eggs and porkbelly with Sriracha mayo to savory waffles topped with kimchi eggs, food trucks are setting a new precedent for the integration of Asian-inspired flavors into classic breakfast dishes. And this trend is spilling over to QSRs. Sriracha, the popular Asian condiment, has gone mainstream, with Sriracha being featured in everything from a Bruegger’s Bagel Sriracha egg sandwich to Subway’s new signature Sriracha sauce.

Leading this charge toward flavorful fusion? Millennials, of course.

According to Technomic’s 2013 Breakfast Trend Report (as reported by Food Navigator USA), 39 percent of consumers aged 18 to 24 and 46 percent of consumers aged 25 to 34 are looking for more ethnic flavors to be included in breakfast foods. And it’s not just Asian fusion; Latin-inspired flavors continue to be a staple breakfast trend. Latin-inspired dishes have long been a feature on the breakfast menus of many classic American QSRs— like McDonald’s sausage burrito and Burger King’s Southwestern breakfast burrito— where they have enjoyed considerable success and inspired imitation.

In 2015, breakfast will continue to reign supreme as one of the hottest trends in the food industry with more food and flavor options than ever before. From new gluten-free offerings to the integration of more sophisticated ethnic flavors at mainstream chains (would you like a side of poblano peppers and mole sauce with those eggs?), breakfast all day, every day is here to stay.