From The Jetsons to Your Table: 3D Printed Food 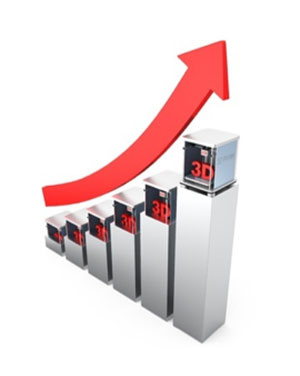 When Elroy Jetson wanted a heaping helping of Irish stew or turkey dinner, all his mother had to do was push a button to produce a steaming hot helping of the plat du jour. While this was the stuff of a science fiction cartoon 50 years ago, the future has arrived. Later this year, in select locations, diners will be able to experience 3D printed meals.

Read on to learn whether this new application of 3D printing, currently at the forefront of innovative food technologies, will soon make its debut in a city near you.

While 3D printing may sound complicated, the concept is simple enough: the making of a three-dimensional object from a virtual design using a 3D modeling program or 3D scanner. Also known as additive manufacturing, the 3D printing process recreates the model by producing a series of thinly sliced, 2D horizontal layers that form a cohesive three dimensional object.

A variety of different materials are used in 3D printing— plastic, wax, polycarbonates, photopolymers, steel and other metals such as silver and titanium. Widely recognized for its potential in the medical industry, 3D printing has applications in everything from jewelry to aerospace.

Is food the next frontier? Absolutely, according to digital gastronomy company Reimagine Food of Barcelona and digital architecture and design firm Green Geometrical Laboratory (GGlab) of Valencia and New York.

If these visionaries have anything to say about it, 3D printed food will make its delicious debut in two cities nearly 4,000 miles apart by the time the ball drops on 2015.

3D Printing and the Food

Pioneers in innovative food technologies, Reimagine and GGlab have joined forces in a bold culinary endeavor. Plans are underway for a December 3rd international event— to be held simultaneously in New York and Barcelona— during which a complete 3D-printed meal will be served to 12 diners in each city.

And “complete” doesn’t just mean the food: if all goes as planned, the entire table setting— from salt and pepper shakers to utensils— will also be 3D printed.

If you ever coveted the lives of George, Judy and their Space Age spawn, you probably pined for a maid-on-wheels of your own. If you’re still suffering from a case of Rosey the Robot envy, this meal offers serious wish fulfillment: it will be served up by REEM, a sophisticated robot which used predictive intelligence to determine popular menu items.

You wouldn’t expect a meal like this to come cheap, and the price tag doesn’t disappoint. Reimagine Food estimates the full cost of both meals will come in around $200,000— a pretty penny for a meal constructed of chicken puree machine-sculpted into the form of roast chicken or a hamburger.

Coming to a 3D Printed Table near You?

Depending on where you live, 3D printing technology may already be part of the local food industry without you being aware of it.

In Germany, for example, more than 1,000 nursing homes have been using the technology to create Smoothfood— a printed foodstuff that has the look and taste of regular food, but is easier to chew and swallow. Cooked ingredients are pureed and strained before being mixed with a “texturizer” and 3D-printed into one of six familiar shapes: chicken, pork, pasta, potatoes, cauliflower or peas.

The biggest initial obstacle to the global spread of 3D printed food is cost, but considering the rapid rate at which 3D printers are decreasing in price— you can pick a personal, non-food printer up for under $200— wide-scale application of food-grade 3D printers may soon be within reach for both manufacturers and individual consumers.

Until then, it may remain within the domain of novelty "boutique" cuisine.

While we may not know precisely what the future holds when it comes to innovative food technologies, we can conclude that 40 years from now it will look dramatically different than it does today. Certainly, we’ll be one step closer to a look at that future following December’s seminal supper. Now about those flying cars…