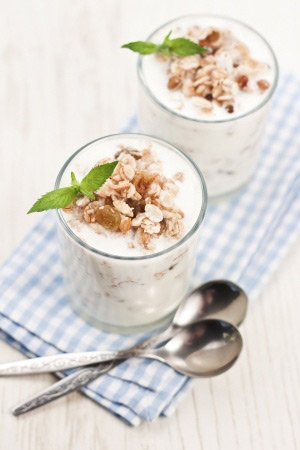 Greek yogurt—this golden child of healthy breakfast foods exploded in the market a few years ago. But now, in 2015, the thicker and tangier yogurt has officially transformed from a fad product to a shelf staple. Unfortunately, the food stuff is a victim of its own popularity, losing its novelty appeal among the typical grocery shopper, though the yogurt still has a strong appeal for those who are invested in health foods. But these foodies aren’t just looking for any Greek yogurt.

These days Greek yogurt manufacturers and distributors are noting that those shoppers who purchase a container of Greek yogurt are choosing the organic option or one made with milk from grass fed cows, notes FoodNavigator-USA. If you’re looking to break into the market, it’s not going to be easy.

Here’s what you— and your distributors, suppliers and manufacturers— need to know in order to keep your Greek yogurt front and center on store shelves.

When Greek yogurt first entered mainstream markets, every grocery shopper was jumping on the bandwagon. A distributor could supply a store with Greek yogurt or a Greek yogurt product like cream cheese, cereal, granola bars, dips and frozen yogurt on a stick and expect to meet with at least modest success. While distributors can still find space for Greek yogurt and yogurt-based items on store shelves, options aren’t as unlimited as before.

Finding success means streamlining products to a target consumer— those individuals who are willing to spend more money on their health are getting more particular and knowledgeable about the ingredients in Greek yogurt. This grocery shopper is:

You can’t afford not to cater to these consumer wants when popular retailers like Whole Foods are listening to what their shoppers are saying about brands.

Last year, there was an online uproar among health foodies when the story came out that Chobani brand of Greek yogurt, despite its claims to be all-natural, is made from milk from cows that are raised on feed with GMO grains. In response to the furor, Whole Foods took Chobani yogurt off their shelves in order to make space for organic and GMO-free brands of Greek yogurt.

One of the key selling points of Greek yogurt has been better nutrient density over plain, old school yogurt. For example, Fage, one of leading manufacturers of Greek yogurt in the US, has developed a plain nonfat variety that, per each 100 g serving, contains:

For the same amount of plain Yoplait consumers receive:

Manufacturers interested in keeping their Greek yogurt on store shelves should note that consumers are willing to pay more for the added nutrition (and protein in particular) of this variety of yogurt.

Shoppers are willing to pay $5 to $7 per container of Greek yogurt, compared to $2 to $4 for the same amount of regular yogurt. And consumers are becoming increasingly choosy on the type of Greek yogurt products they are purchasing. As a result, the price for all-natural Greek yogurt has spiked the price even further. And brands should anticipate that those prices will continue to climb throughout 2015.

Food brands that want to hold on to their prime shelf space should look into creating better all-natural products that use no artificial flavors, colors or GMO ingredients.