How to Adapt Your Best Dishes into Sous Vide Recipes 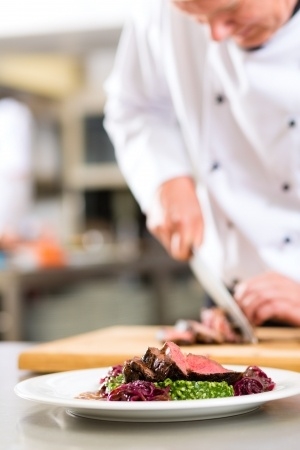 If you're looking for ways to improve your restaurant's kitchen efficiency, you might benefit from implementing sous vide cooking methods, as recipes allow.

So if your kitchen is not currently using sous vide methods, can you easily make the switch? Can your existing recipes be modified to incorporate sous vide preparation? The answer in both cases is yes.

Meats like beef, pork, chicken and turkey are, naturally, simple to prepare under sous vide conditions. Once you have cut, trimmed or de-boned the meat to your desired specs, you place it in the bag, vacuum out the air, set your temp and timer, fire and forget for a few hours.

Figuring out the right time and temperature might take a little bit of trial and error at first, but the great thing is that under sous vide methods, the outside layers won't cook out-of-time with the interior. Temperature change is consistent throughout the dish.

For those cooks new to the process, the good folks over at Modernist Cooking Made Easy have published a guide to sous vide temperature ranges for common dishes. In general, they advised, a 1" cut of meat takes about an hour to cook through, while a 2" cut will take approximately 3 hours.

The most common question chefs and cooks new to using sous vide preparation methods ask, though, is how to put the flavoring touches on the meat once the sous vide cooking portion is done. The important thing to remember here is that the sous vide portion of cooking is going to be the part best suited for infusing marinade flavors, for tenderizing the meat and, of course, for making the meat safe for consumption.

Let's say, for example, that you were cooking a pork dish, like a flavor-crusted pork chop. A quick check of chef message boards online reveals a potential solution.

In this case, one cook asked how a fennel-crusted pork chop could be accomplished under sous vide methods. Several chefs recommended pre-cooking the chop sous vide, then chilling or freezing the meat until it was time to serve. Since the meat will have been pre-cooked, re-heating is safe and incredibly simple. To accomplish the fennel crust, it was recommended that this chef dust the meat with fennel and crisps, then quickly pan-sear it or grill to re-heat the chop and attain the right crispiness.

One caveat: watch the amount of time the food will spend between 40°F and 130°F.

This is the temperature range in which harmful bacteria like Listeria and Salmonella grow, so you don't want to let your food remain in this range for a long period. It's not advisable to keep a food in this range for 4 hours or more, so you can't do an extended cook time below 130°F. If you need to do an extended cook, make sure that the temperature exceeds the 130°F threshold, and use a thicker cut of meat, which will take longer to cook throughout.

With a little recipe innovation, it's easy to convert to a sous vide kitchen.

Experiment with your favorite recipes and see where the sous vide cooking style would lend itself well to your kitchen's flow. With a careful, thoughtful menu planning, you can increase your kitchen staff's efficiency, reduce energy expenditures and cut back on food waste by employing sous vide recipes in your restaurant.