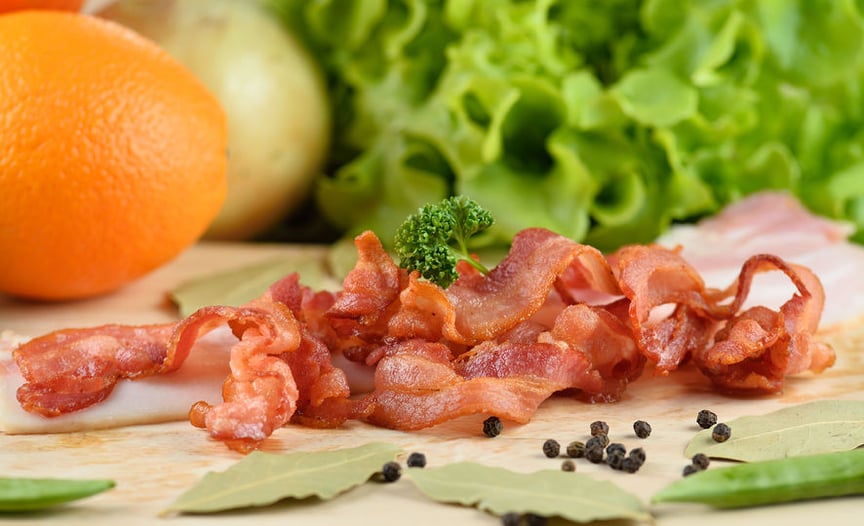 The Science of Bacon

Bacon is irresistible for a number of reasons. It leads off with an aroma made up of 150 different organic compounds. Scent is deeply linked to memory, and the scent of bacon evokes happy memories like a favorite diner or leisurely weekend breakfast at home. Its flavor gives a smoky, umami-filled punch to a number of dishes. It offers a pleasing texture with a mix of chewy and crispy bits. But, the most important ingredient is bacon's mix of muscle and fat.

During cooking, fatty acids in the cell membranes disintegrate, allowing flavorful compounds to form. The result is a combination of nutty, sweet, buttery and grassy notes that blend together to give bacon its unique taste. Plus, as mammals that spent a large portion of history chasing calories, fat is appealing. We recognize it instantly because the shape of the molecules leave a smooth and lubricated feeling in the mouth. The smooth feel of fat is pleasing on a primal level.

Probably not for all or even a majority of consumers, but there some Americans who may opt for bacon alternatives over the real thing.

All of that fatty pleasure comes at a cost. A two-slice serving of bacon contains nearly 100 calories, two-thirds of them from fat. There are 350 mg of sodium and 18 mg of cholesterol.  And those in search of more healthful options are turning to alternatives like turkey bacon.

In a recent survey, 61% of consumers agreed that turkey is a healthier menu choice than pork or beef. And, a larger portion of consumers than in the past say that they are opting for leaner turkey-based substitutes such as turkey burgers and turkey bacon. Many food producers are adding premium turkey bacon to sandwiches, burgers, breakfast burritos and other dishes where pork bacon previously held the honored spot.

Turkey bacon is naturally lower in fat because turkeys do not have the same layer of belly fat that pigs do. Instead, the fat level is controlled during production. A bacon brand can ask their co-packer to include lower amounts of fat to create a less caloric, healthier treat. While most turkey bacon is made with ground turkey, which allows for greater control of fat-to-meat ratios, you can make bacon using whole slices of turkey thigh. Depending on the manufacturer, turkey bacon can ring in at around 35 calories a slice, with as little as 15 of those calories coming from fat. While lower fat means a different mouthfeel than pork-based bacon, turkey bacon can supply the desired smokiness and meatiness.

Some consumers are also more concerned about sustainable meats than they were in the past. Livestock produces over two-thirds of all methane gases released by human activity. Raising turkeys requires less water, less land and produces less waste than pigs. This makes it the natural pick for more environmentally-conscious consumers.

The solution for a bacon brand and their co-packer is to anticipate building food trends and to give consumers the products that they want. By offering a range of satisfying yet healthy bacon alternatives, in addition to traditional favorites, you can maintain sales and keep customers coming back.