Sous Vide: A Science and an Art 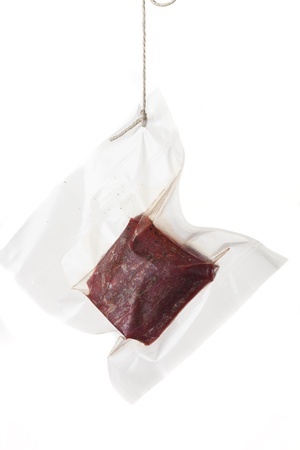 The French have, once again, rattled the pots and pans of the food service industry by introducing a revolutionary style of cooking that marries gastronomic hard science with a minimalist artistic style reminiscent of Dutch painter Piet Mondrian.

Although business throughout the food service industry are sure to get the best of both worlds with sous vide, some chefs are leery of how the cooking method may undercut their "personal relationship" with their creations.

Sous Vide, or “Under Vacuum”

According to the most basic definitions, sous vide is the process of cooking vacuum-sealed food in a water bath at a very tightly controlled temperature. But sous vide is unlike conventional cooking methods which use high temperatures to rapidly bring food up to the desired temperature. Sous vide, initially experimented with by culinary innovators in France over 30 years ago, slowly cooks packages of vacuum-sealed food in low-temperature water— ensuring that food remains juicy and tender.

The fundamental principle supporting the “art” of sous vide is that food should be served at the same temperature with which it was cooked. Although some dishes depend on fluctuations in the pressure metrics involved with the vacuum process to cook properly, sous vide aficionados believe most of the benefits gained by the sous vide cooking method come from exposing food to low, even temperatures.

Art and Science Clash in the Kitchen

Scientific American has pointed out that “the simple act of vacuum-packing food and immersing it in hot water changes the physics of cooking more than you might think.”

While traditional cooking rapidly forces excessive heat into the middle of foods and produces an extreme temperature gradient between the food's interior and exterior, sous vide chefs immerse their creations in water less than two degrees higher than the core temperature.

Computer-controlled equipment used in sous vide cooking is capable of maintaining the temperature of this "bath" within a half degree of the temperature as equilibration of the food's inner and outer surface occurs. Moreover, you don't have to worry about burning dinner since you can't overcook food using the sous vide method. No more calling out for pizza at the last minute!

Although the benefits of sous vide are many—it keeps food moist, reduces the chance that contaminated food will reach consumers, inhibits oxidation reactions responsible for impairing food flavor or color— critics of the cooking method claim that it removes the ability for chefs to personalize dishes with their own sense of style and "flair" and create gourmet masterpieces. As The Guardian has so eloquently remarked: "[There is] no touching, smelling, tasting, listening, looking, or engaging with the food... science has got your back."

Will Sous Vide Pillage the Food Service Industry or Be Banished by Purists?

For some, the idea of eating food that has spent several hours cooking in plastic is not a very appetizing thought. Additionally, some concerns have been raised about chemicals called "plasticizers" leaching from plastic bags. However, science (again) steps forward with its mighty two feet and confirms that the risk of suffering illness from chemicals used in making plastic baggies specifically for use in sous vide cooking is none.

Whether the next chain restaurant you patronize offers dishes "prepared" by sous vide experts remains questionable in the minds of most food service industry experts. On the other hand, busy families who don't have the time to spend dabbling with various recipes in the kitchen (or worry about forgetting something cooking on the stove) may soon discover the advantages of sous vide and make it something the food service industry can no longer ignore.