The American Appetite for Bacon Isn't Dead Yet 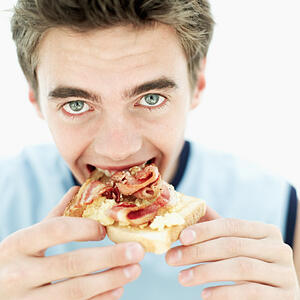 Americans may be increasingly focused on healthy eating, but you would never know it from the trends in bacon consumption. Bacon not only remains popular as a breakfast meat, but continues to enjoy a place in all kinds of dishes. While new food fads continue to emerge, bacon remains a popular item, and an essential one to consider if you are in the food service industry.

You cannot afford to overlook such a popular trend lest you risk losing customers. A better approach is to learn about trends in American bacon consumption so that you can cater to your customer’s tastes.

In recent years, bacon has appeared on what seems to be every menu in the country with no holds barred on the types of menu items that can contain bacon. Even the most casual observer cannot help but notice the plethora of bacon-containing foods, from appetizers through desserts. As the trend has progressed, bacon as an ingredient has grown from being part of the occasional innovative recipe made in exclusive restaurants to appearing in family, casual, and fast-food restaurants.

The Basics on Bacon

Bacon comes in standard sizes that are important to know when you are ordering bacon for your restaurant’s kitchen or describing bacon as a side dish on your menus. According to the National Pork Board, these are the typical categories of bacon slices.

You can even help your customers understand how the right serving of bacon can easily fit into their diet. Each two-slice serving of bacon contains 73 calories, which is about the same as the amount in a large egg or a slice of bread. It has 6 grams of fat, or less than the amount in a half-tablespoon of butter, and provides 4 grams of protein— just over half the amount of protein in a large egg.

In the last decade, bacon has accounted for a significant portion of the total breakfast meat in the food service industry, from major chains to independent restaurants.

Although the NDP Group, a business insights firm specializing in consumer researcher, has estimated that upwards of 80% of Americans eat their bacon at breakfast— some 83% of all bacon is consumed at breakfast, say reports gathered in 2007— bacon isn’t just for breakfast anymore. And it hasn’t been for quite some time.

Just think about it how many different kinds of recipes or food items have you seen pop up in restaurants, on the shelves of the local grocery story, or passed around by food bloggers (foodies and family-friendly alike) that haven’t been meant for breakfast.

With the rash of bacon flavor beers, “healthy” bacon dishes (which moderate saturated fat), any number of quirky bacon-related gift ideas, and a new holiday dedicated to the food stuff one thing is for certain— bacon sells like hot cakes (pardon our pun) even when it’s not served with eggs and flapjacks.

For years, bacon has found the most favor with the middle aged crowd, but it’s nearly as popular with the younger and older demographics as well! And it’s a kitchen staple for many Americans (about half of all households keep a ready supply of bacon on hand).

Given the popularity of bacon, it is essential for food service establishments to continue to stay engaged in the bacon market and incorporate bacon into their menus.