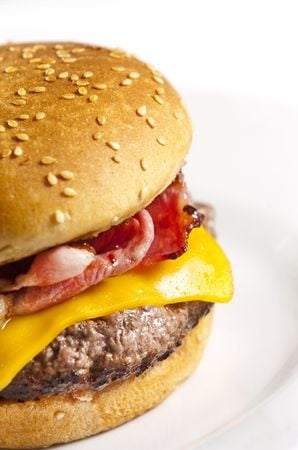 Success in the food service industry, like in any other, is tied to the ups and downs of local and international markets. And if you want to understand how well the economy is performing, one of the best clues may be in that bacon cheeseburger you served for lunch today. Food service industry trends are a great way to get your finger on the economic pulse of a nation—and they also forecast the ways people purchase food.

Economists like those at ConvergEx Group sometimes use what they call the Bacon Cheeseburger Index as a way to gauge inflation.

Bacon cheeseburgers contain three ingredients important to the food market: the cost of patties reflects the beef market, cheese indicates the health of the dairy industry and bacon prices show how well pork is doing. In their June 2014 report, ConvergEx Group said the overall prices reflected in the Bacon Cheeseburger Index were up 7.9 percent over the previous year.

In addition to its place on top of a great cheeseburger, bacon is currently king of food service trends. The pork industry began to promote bacon as a way of perking up sagging pork belly sales, which had taken a beating in the low cholesterol craze that swept the nation in the 1980s. The promotion took off. NPD Group reported that there were 6 percent more servings of bacon in April of 2014 than in April of 2013.

Today, 62 percent of restaurants in the United States have bacon on the menu, according to the National Pork Board, but bacon is not just for breakfasts anymore. Today, you can get bacon sunscreen, bacon perfume, and even bacon deodorant.

Some governments still use food trends to assess changes in their nation.

China, for example, plans to use pickles as a way to count people. That massive nation plans to move 250 million people to cities but officials there have found provincial data about the number of people still living in rural areas to be unreliable – migrant workers moving across the landscape makes it difficult to count the number of people in that area.

To overcome this problem, economic engineers came up with the “pickle index” that estimates the population of an area based upon the number of pickles eaten there. The migrant workers in China apparently love a particular type of pickle, so officials realized areas with high pickle sales meant migrant workers were sweeping through the area.

In the United States, many use the Hot Dog Index as a measure of economic health – happy Americans with expendable cash love to go to Major League Baseball games and chow down hot dogs. The National Hot Dog and Sausage Council expect MLB fans to eat 21.4 million wieners in 2014, about a million more dogs than in 2013.

While economists use food trends to assess the financial health of the nation, there are plenty of other uses for food service industry trends. Some use these trends to develop the next innovative product while others look for new ways to deliver the trendiest food products in new and interesting ways.

For example, a company named Sprinkles took advantage of the recent cupcake craze to introduce the world’s first Cupcake ATM. Today, you can buy a cupcake from a machine at any time of day or night in Atlanta, Beverly Hills, Chicago, Dallas, Las Vegas and New York. Other trends now include Automated Caviar Boutiques and burrito kiosks.

While economists and government planners use food service industry trends to count people, estimate economic growth or sell cupcakes, most consumers just want to eat the food they buy – especially food that has bacon on it.