The Complete Breakdown on the Lunchtime Habits of Americans 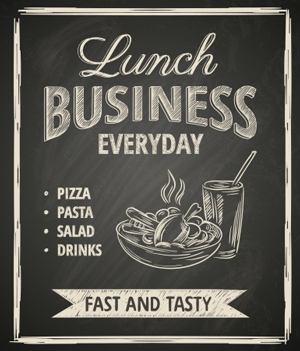 Lunch is easily the most overlooked meal of the day. It’s not given the significance of breakfast or characterized as a family meal like dinner, but when it comes down to simple numbers, lunch is definitely a meal you don’t want to ignore when setting up your marketing strategy. Why? Because a recent report by Forbes looked further into American eating habits and discovered that the average person spends close to $1,000 per year to eat lunch out.

Who is eating lunch away from the office?

As it turns out, 70% of the working public eats lunch out occasionally. This includes everyone: men and women, people making six figures and those making minimum wage. All around the country, professionals are making the most out of their lunch break by enjoying a freshly prepared, delicious meal that doesn’t involve Tupperware and a microwave.

How often do they buy lunch out?

Surprisingly, most people head out for their midday meal two times per week. However, 2.4% of the public indulges every single day that they work. It turns out that age is a huge factor in how often people enjoy lunch outside of the workplace.

The general rule seems to be that the younger a diner, the more frequently they eat out.

What about the folks above 65? They only purchase lunch out one time per week.


But even at an average of two meals for each American every week, lunch is clearly bringing in substantial revenue across the country and should definitely not be ignored.

What are they spending?

When studying American eating habits, it’s not only important to consider how often people eat out, but also how much money they are spending for their meals. As it turns out, the average amount spent is $10 per meal, with the biggest spenders being those who make less than $25,000 per year.

Yes, you read that correctly. The survey responders in the lowest income bracket reported spending an average of $11.70 per meal, while people with an income above $50,000 spent about $9.55.

But perhaps the most shocking statistic found from this survey of 1,003 Americans is that 1% of the population is willing to spend upwards of $50 per meal to eat out. That’s over $5,000 spent annually if they only go out the average of twice per week.

Does gender make a difference?

Yes, actually. It really does. Spending and frequency are highest among men, who spend about 44% more for lunch than their female counterparts. Women only head out an average of 1.6 times per week and spend a total of $14 combined for these outings, while men average two times per week with a budget of $21. So women are either eating less when they go out, or they are just better at finding the deals. Whatever the reason for the variance, both gender groups are will to spend their money on the meal, and that’s what matters.

This is where things really get interesting. Southerners love their meals out, which is demonstrated by their average of eating out twice per week, compared to northeasterners who only opt for lunch out about 1.5 times a week.

That being said, it’s the people from the northeast that spend the most money. They are spending $11.40 per meal, while folks in the south are only spending $10. Yes, this is probably a result of the higher cost of living in the northeast, but is still something to consider.

Despite age, socio-economic, and regional differences, one thing is clear by looking at these American eating habits: lunch deserves just as much attention as the other meals. When people are away from home, they still need food, and it’s up to the restaurants of America to give it to them.