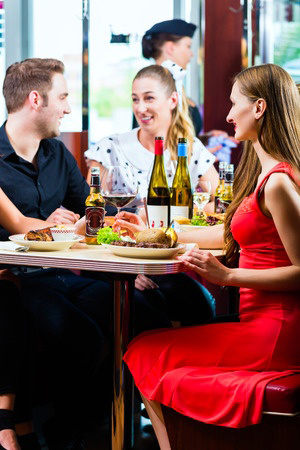 Americans have a reputation for fickle eating habits – a menu item might be so hot one year you cannot serve it up fast enough and so cold the next year that you can’t even give it away. Sometimes it seems impossible to predict how consumer tastes will change, but food industry scientists are able to synthesize data from restaurants and suppliers across the country to identify the food service trends that you can use to create a menu that is always exciting and new.

Americans are predicted to return to restaurants with a vengeance in 2014.

Technomic is not so optimistic. While the 500 largest U.S. restaurant chains registered a 3.5 percent annual sales increase in 2013, it paled in comparison with the 4.9 percent increase the year before.

"Although we have seen overall growth within the Top 500, the pace has slowed since last year," said Ron Paul, President of Technomic. "Competition for share of stomach is getting more and more challenging. But brands that have found a way to differentiate themselves are gaining market share."

This means food service organizations that can recognize emerging trends and create unique, branded products that cater to those trends will gain a larger share of the market than those who continue to serve the same old menu.

Where are Americans Eating?

The restaurant industry as a whole gets a larger share of the American food dollar than it used to. In 1955, the average American spent only 25 percent of his entire food budget in a restaurant. Today, he spends 47 percent of his food dollar for food cooked outside of his home. Researchers use a variety of scientific survey methods to determine exactly where the typical American spends his money when he eats away from home.

In 2013, the most growth in limited-service restaurants which saw an average 3.9 percent increase in sales in 2013. Some limited-service sub segments saw above average sales growth with restaurants in the Asian, bakery café, and coffee café categories pulling in the highest gains.

Full-service restaurants continued to grow in 2013 at a slightly less robust pace than in 2012 with steakhouses like Texas Roadhouse and LongHorn Steakhouse driving the greatest sales increases, rising 6.2 percent in 2013. Varied-menu chains served up lukewarm sales increases at only 2.5 percent overall but the category leader, Buffalo Wild Wings, boosted its sales 12.9 percent.

Bold is big this year.

According to the Culinary Trendscape Campbell’s Culinary & Baking Institute, 2014 will find its flavor influence from south of the border.

Using a scientific guide to America’s dining habits, you can stay a step ahead of tomorrow’s food service trends. Americans will always love to eat out, especially at restaurants that offer innovative and fresh ideas in food.