These Meat Substitutes Could Fool the Most Dedicated Carnivore 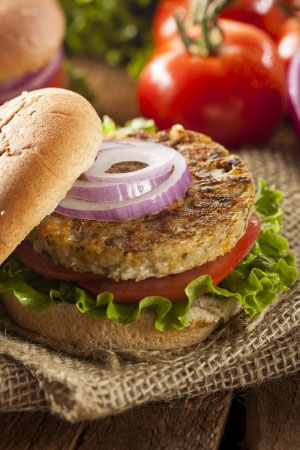 As far back as the early 1960s, some scientists and nutrition experts predicted a coming worldwide protein shortage, and they may have been right.

With over one-third of Earth's arable land already dedicated to animal-based protein production, and given that the world's human population is expected to exceed 9 billion individuals by 2030, we may very well be facing a protein production crisis.

With that dilemma in mind, food innovators have been steadily developing better ways of producing plant-based proteins and bringing them to market.

In the past, plant-based proteins have seemed odd, less desirable, or even unpalatable to the majority of omnivorous food consumers, but new food technology and campaigns to increase awareness are starting to break those barriers down.

Plant-based protein products are no longer foods you have to make a special trip to the Hippie-dippy local health food store to procure. Increasingly, "meatless" proteins, heat-and-serve vegetarian cuisine and vegan options are popping up in mainstream grocers' aisles.

Here are three plant-based protein producers you should be keeping your eye on.

You may have heard of gardein. Launched in 2009 by Yves Potvin, the company was founded on the belief that consumers will choose healthier, plant-based fast food if they are presented with the option to do so. And that seems to be the right assessment.

Just five years after launching in the US retail market, gardein has experienced 35% year-on-year growth and, at the beginning of 2014, was worth an estimated $100 million.

The brand produces a line of plant-based meat substitutes, it touts, "for meat and veggie lovers alike." It specifically focuses on developing quick-to-prepare foods, like its "chick'n scallopini," that busy working people can simply heat and build a meal around.

In an interview with FoodNavigator-USA's Elaine Watson, founder Potvin said that the market for plant-based proteins is undergoing a monumental shift. Whereas earlier generations did not embrace meat alternatives on a wide scale, Potvin asserted that Millennials (gardein's most important target demographic) seem to see meat substitutes as a "natural evolution" of the regular diet.

The brand can now be found in Kroger and Wal-Mart, in addition to large natural food retail chains like Whole Foods. Potvin’s business model specifically calls for gardein products to be placed not in major grocers' natural foods sections, but in the regular frozen food aisles— in direct juxtaposition to mainstream, meat-and-potatoes products.

"We do better when we are merchandized in the main frozen aisle than in natural food sections of stores," Potvin said. "What's unusual about our products is that when [non-vegetarian] people try them, they buy them again."

Another all-lower-cased entrant into the meat-substitute market is Lancaster, Pa.-based neat Foods, founded by Phil and Laura Lapp.

The brand's story begins with the day that their two young daughters announced they would no longer eat any meat— in addition to the beans and vegetables that they, being normal, picky kids, already refused to eat— after they saw something on TV that had made them think twice about consuming it.

"We started to try several different vegetarian meat replacements that were already out on the market," said Laura Lapp, a trained neuroscientist.  "And it was either the texture or the long list of chemicals that were in these products that really made us shy away from them."

"That's when I went to the kitchen and I started to try to come up with my own recipe for a way to get my kids protein in a form that they enjoyed," she related. "I came up with something that had the consistency of meat and that tasted really good."

The vegan-friendly nut, bean and oat-based meat substitutes are shelf-stable and, like gardein, quick to prepare.

The line features a baseline Original ground beef-substitute, an Italian Mix for use in meatballs and spaghetti sauces, a Mexican Mix inspired by the Lapp family's love of family taco night, a Breakfast Mix and also a chia-and-garbanzo Egg Substitute.

The products are not only gluten-free, but also soy-free, so they are excellent options for people with strong allergies or sensitivities to wheat and soybeans.

Another gluten-free, soy-free food innovation is Beyond Meat's burger substitute, "The Beast," which the company hopes to bring to market this quarter.

Interestingly, like gardein, Beyond Meat will not be specifically marketing to the vegetarian and vegan consumer, but rather to the mainstream omnivore. Nowhere on the packaging will appear the words "beef-free," Connolly told FoodNavigator-USA, because the company wants "to move away from the notion that something is 'missing.'"

If you're looking for a way to serve healthier, more sustainable cuisine, serve up a few meat substitutes.

If, as Potvin asserted, the market is truly shifting toward a model that is more tolerant and accepting of meatless dishes, then new food technology promises to deliver viable, marketable options. Plant-based proteins are no longer the exclusive purview of vegans and vegetarians.

You'll probably find a greater willingness on the part of your customers to go for the veggie option, even if you tell them up front that a dish is meatless.