Tracking a Trend: The Untold History of “Baconmania” 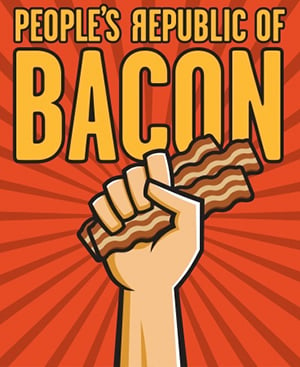 There's no doubt about it: bacon is big business in food service. Even in an era when people are becoming more conscientious of their health and increasingly turning to meat substitutes, the lure of crispy, salty, pan-fried pork is pretty powerful. There are blogs, books and even entire festivals dedicated to America's favorite breakfast meat.

What used to be a quiet, unassuming accent for the hearty farm breakfast is now an integral part of salads, veggie side dishes and even sweets. But that wasn't always the case. "Baconmania," as some have dubbed it, is a relatively new phenomenon, only having sizzled up over the past decade or so. What brought bacon to the culinary forefront?

A Food Trend Born in the Marketing Department

It used to be that the majority of restaurant bacon sales were at greasy spoons, pancake houses and— in the summer at least— country clubs serving BLTs. It was thus a somewhat seasonal commodity, and the market for pork bellies was notoriously volatile. Large price swings made profiting from bacon a bit of a crapshoot.

Now, all that has changed.

When the anti-fat, anti-nitrate scares of the 1980s and early 1990s caused consumers to shy away from bacon and other processed pork products, the industry responded by focusing attention on lean cuts— like chops and tenderloins— of "Pork: The Other White Meat." And that campaign worked. But the price of fattier cuts plummeted. Farmers were still feeling the porcine pinch. The industry needed to do something to stoke the public's appetite.

"While most food trends tend to trickle down from the gourmet market into the mouths of mass consumers, that wasn’t the case with bacon. Bacon mania was sparked not in the kitchens of fancy restaurants in New York or Chicago, but in the pork industry’s humble marketing offices in Iowa," reported Bloomberg Business Week's David Sax.

Taking advantage of the dual marketing appeal of bacon's big flavor and (at the time) rock-bottom price, the pork industry aggressively courted restaurateurs with a modest "Bacon Makes It Better" campaign. Adding a little bit of bacon, the industry advised chefs, could not only punch up the flavor, but also be used to justify a nice-sized mark-up for otherwise bland dishes. Moreover, its shelf life is nice and long, so waste is less of a problem.

The restaurant industry latched on to the idea and by 2006, the trend was really starting to roll, fed by the Internet, bacon-loving food bloggers and voracious social media users.

Since then, bacon production has become a $4 billion per year industry and a food trend juggernaut. The demand for it has become so steady, in fact, that in 2012 the Chicago Mercantile Exchange halted trading in pork bellies. There simply wasn't enough market volatility to justify keeping the traders on the floor.

Bacon's in everything: in restaurant entrees, on salad bars and topping countless pizzas. It's even flavoring hard liquor (there's a bacon-infused vodka) and some consumer goods. People have become honest-to-goodness bacon freaks.

"More than cupcakes, ramen, or kale," Sax asserted, "bacon has become the defining food trend of a society obsessed with food trends."

So What Makes for the Perfect Piece of Fatback?

One thing about bacon: there's a lot of variety. Canadian lean-style, thick-cut, hickory-smoked, peppered, regular strips,  bacon crumbles, bacon shakes, maple syrup-infused, bourbon-marinated… all of it tailor-made for the variety-crazy Millennial consumer. And that presents quite a bit of opportunity for food producers and food marketers.

There's no one way to cook it, either, as the Art of Manliness blog attested. Pan-fry it. Bake it. Boil it. Sous vide prep. It's all good. The key takeaways for the food industry are that, regardless of the current health trend, bacon appears to be here to stay.

"Despite frequent cries that we have reached peak bacon, the trend now looks like a permanent shift in dining habits," Sax wrote.

How can food producers and food service providers play to the trend?

Well, there's no such thing as too much flavor or texture experimentation in the bacon world. Companies are adding it to ice cream and to gumballs. They're wrapping hot dogs in bacon. They're stuffing bacon into chicken and turkey. They're even making "fake-on" for the vegetarian and vegan trade.

The demand for further bacon innovation is here. So, bring on the recipes. Bring on the flavors. Figure out healthier ways to preserve and store it. Because if you can dream it up, rest assured— bacon's makin' money.