Uncanny Valley: The Robotic Workers in Food Packaging and Processing 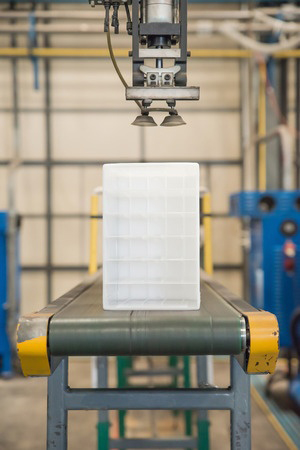 The food packing industry has always struggled to minimize production costs and keep injuries to laborers to a minimum. The advent of new robotic manufacturing technology in the late 1950s and early 1960s offered the food industry a way to do just that, but machines were expensive to purchase and maintain. The capital start-up costs were often prohibitive, however, so many packing companies chose to soldier on with manual assembly lines.

That seems to be changing— quickly.

According to the Association for Packing and Processing Technologies (PMMI), only about 20 percent of food manufacturing firms used robotics on their production lines in 2008. By this year, 2014, that had grown to 75 percent.

Why The Sudden Shift?

There are several reasons why so many companies have switched to robotic manufacturing processes so rapidly. For one, the price of new packaging machines has come down somewhat as technologies have advanced. As those costs have fallen, the projected return-on-investment ratio has risen, incentivizing many companies to purchase new systems. More importantly, access to relatively cheap financing (courtesy of government stimulus in the wake of the Great Recession) has given companies the necessary capital to purchase and install time-saving, efficient robots.

And on the back-end, companies needed to reduce labor costs in order to stay competitive in the face of a tight consumer market. Many had to switch to robotic lines just to survive. Naturally, this does mean that many laborers have found themselves on the short end of the shift.

From a macroeconomic viewpoint, though, the switch to robotic manufacturing helped to keep food production costs manageable even as energy costs spiked between 2002 and 2013. With US unemployment low and the hire rate holding steady, it is likely that many of those displaced workers are finding other employment; in the end, the switch to robotic manufacturing is probably an aggregate win for the economy.

Robotic lines are capable of far more than the sorting, pouring, sealing and stacking functions that rudimentary canning and bottling machines performed for us in the 1960s. Some modern automated packaging systems can change their own tools, allowing companies to quickly convert lines to accommodate the production of various product sizes, or to switch manufacturing runs from one product to another with a minimum of downtime.

One TLM packaging line, produced by German manufacturer Schubert, can accomplish a re-tooling stop in as little as five minutes. The robot changes its own tools in an enclosed zone, increasing safety for workers in a plant and also decreasing the risk of cross-contamination.

Schubert has also made great strides in optical scanner innovation.

Where older systems might have been unable to distinguish a manufactured item from the line conveyor if the object and the belt were the same color (necessitating either long downtimes for belt change-outs, or limiting the manufacturing color palette available to companies), the Vision System scanners on Schubert's TLM-F44 packaging machine are able to overcome this difficulty.

In a recent demonstration, the Vision System was able to distinguish between white objects even on a white belt background.  It was able to do so, according to Food & Beverage Packaging, because the "height profile provided by the scanner depicts the three-dimensional form of the product to be packaged."

"This innovation opens up attractive possibilities for quality control," the site reported. "For example, a TLM line with the new scanner can detect 3D defects, such as when a brown sandwich cookie with brown cream is missing its top layer.

Three-dimensional imaging can also help food manufacturers to group items of different weights during the packaging process, and to more easily filter out and reject under- or overweight units.

"If the product density is consistent, the TLM Vision System can determine the weight of each product from the data of the 3D scanner," wrote Food & Beverage Packaging. "This makes it possible to complete individual product patterns within a defined weight range during the grouping process. As a result, the manufacturer can save up to 3 percent in raw materials."

New Food Technology Isn't The Future - It's The Present.

Given the potential return on investment and improvement to efficiency and food safety, robotic packaging lines represent an excellent opportunity for food companies to reduce cost, remain competitive and increase customer satisfaction. They can do far more than basic canning and bottling; indeed, their capabilities have become virtually uncanny.