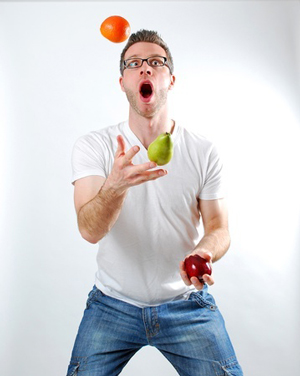 As a nation, we’re famous for our appetites and our hectic lifestyle— two factors that don’t always combine well, especially when it comes to nutrition. Because we always seem to be on the go, many Americans have relied on fast and convenient meals to fill us up, regardless of how healthy or unhealthy they may be. Unfortunately most of these foods are high in calories, saturated fats, sodium, preservatives and other less-than-healthful ingredients, and our convenience-based eating habits have led to a significant increase in health complications.

In fact, the Centers for Disease Control report that more than one third of all adults in the United States are currently suffering from obesity. Fortunately, public awareness of the need for better nutrition is increasing, and supermarket trends indicate that Americans are slowly changing the way they eat in response.

In addition to consuming more processed foods, Americans are also eating more of their meals away from home than they did in the past. In fact, the United States Department of Agriculture reports that the number of meals consumed away from home has been steadily increasing since 1970.

The U.S. Government, however, is committed to the improvement of American nutrition. According to the USDA, over $350 million is spent each year to promote healthy eating. Thanks to these efforts, Americans today are better informed on both the quality of their current diet and their overall nutritional needs.

But this awareness has itself led to positive change.

According to Leading Market Research, a significant number of Americans are limiting their consumption of red meat in response to mounting health concerns, opting for plant-based protein sources or consuming healthier meats like poultry and fish. Other prevailing trends, such as more health-conscious food choices at restaurants, an increased availability of convenient health foods and the rise of public awareness programs, indicate that Americans are slowly moving toward better nutrition.

The Shift Toward Better Nutrition

America's culture thrives on convenience and speed, and most people in the United States still want fast meals, if not fast food, both inside and outside of the home. However, because today's Americans are more realistic about their nutritional deficiencies and more knowledgeable about the negative consequences of an unhealthy diet, a trend toward improved nutrition is evident.

Americans have cut down on their consumption of red meat, and many people are searching for healthier, unprocessed foods or foods with superior nutritional content when shopping at the supermarket. In response to these demands, food production companies are attempting to offer healthier choices to consumers, including more options with low calorie amounts, low sodium and no preservatives. Likewise, many restaurants across the United States, including those categorized as "fast food," are attempting to add healthier meal options to their menus.

Although the American diet is still less than perfect, supermarket trends indicate that a slow and steady move toward healthier eating is in the works.