Baby Spinach, We Hardly Knew You: The Short Life of Food Service Trends 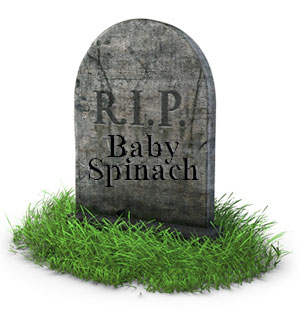 Remember when you couldn’t open up a restaurant menu without seeing a baby spinach salad-- usually topped with cranberries, pecans, goat cheese, and a warm citrus vinaigrette or some other flavor of the day? Well, this go-to green had a good run, but according to a recent Wall Street Journal article, “all food trends have a life span,” and poor baby spinach has reached its timely end.

Also relegated to the dead list? Such also-rans as chocolate lava cake, clear soda, and the earliest incarnation of soft serve frozen yogurt. So what’s next to go the way of the dinosaur-shaped chicken nugget? Read on to find out more about what food service industry trends are on the way out in 2014.

We get it: It’s green. It’s good for you. It goes well in smoothies. While kale won't be disappearing anytime soon, there’s definitely less of a din around this cruciferous craze. Kale didn't do anything wrong, and who doesn’t love a salty crunchy kale chip? It's just facing steeper competition in the form of cauliflower (“the new kale”) and Swiss chard.

You’ve heard this one before. And yes, the cupcake remains in an indefinite state of death throes among food service industry trends. While the truth is that you may never again be more than five feet from one of these cute confections, they’re no longer the only game in pastry town.

Compared to sweet treat shops with edgier offerings, including the two-hour long line-inducing “Cronut,” the cupcake has been relegated to the realm of “nothing special.” In other words, were Carrie Bradshaw still teetering through the West Village on her Jimmy Choo’s, she would probably not be making a stop at Magnolia.

While it may be romantic to share a “For Two” dinner during your engagement celebration, meals requiring team consumption-- as seen throughout NYC gourmet restaurants primarily in the form of whole roasted chickens-- are not likely to gain any additional traction moving forward. While there’s a time and a place for imposing a minimum number of diners (Peking Duck, anyone?) it’s less than desirable as a standard practice... particularly for solo diners in search of a simple meal.

There will always be room on the plate next to a sunny side egg for a few slices of this salty-delicious pork product, but the days of bacon on everything are dwindling. As a cultural phenomenon, bacon had a moment on the dance cards of candies, cookies, cupcakes, and even at the likes of Burger King as a sundae topping. But bacon flavoring is slowly being pushed out by a new “it” flavor among the pastry set-- salted caramel.

The unfurling of the farm-to-table movement across America has led to backlash against the unnecessarily complex, including this technological form of food science. In a recent Forbes article, two of the six interviewed chefs -- Dean Fearing and Fabio Viviani -- voiced a resounding “Not” to molecular gastronomy as a 2014 trend. Jenn Louis objected more specifically to foam, a molecular gastronomy technique. In place of this foodie science, natural, fuss-free foods are expected to reign.

Of course, it’s all subjective: in the same article, celebrity chef Graham Elliot derided the selling of the farm-to-table concept as a movement; instead, he insisted, it should be the standard mode of operation.

Ultimately, today’s ramen burger is tomorrow’s fondue. And while there will always be a hot new food fad making a splash on Instagram and Chowhound, there will also always be another one waiting to take its place. Still, while food service industry trends may rise and fall, timeless, delicious food that fits into modern lives never goes out of style.