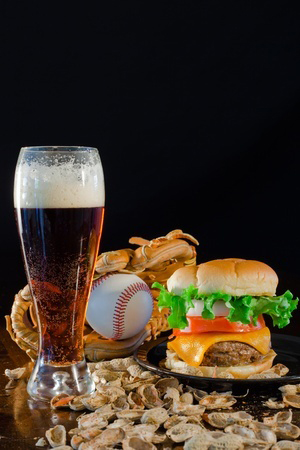 You don’t just order a fish taco at San Diego’s Petco Park; you order a Rubio’s fish taco. It’s not just any old ham and provolone sandwich at Pittsburgh’s PNC Park; it’s a signature Primanti Brothers sandwich. And when it comes time to get your java fix at Fenway Park, you don’t just settle for any cup of coffee; it’s got to be Dunkin’ Donuts. In other words, this is not your father’s ballpark food.

One of the latest food service industry trends? The rise of the brand name in sports arenas and stadiums, delivering new opportunities for unprecedented brand exposure.

Sure, peanuts and crackerjacks are the typical ballpark fare thanks to the storied anthem, "Take Me Out to the Ballgame”-- which says nothing about buying anyone some Dungeness crab sandwiches or two-day roasted beer can chicken. But that's exactly what's on the menu these days at San Francisco’s AT&T Park and Milwaukee's Miller Park, respectively.

Regional cuisine first made the scene in 1992 when Camden Yards started serving up Baltimore's fabled crab cakes and pit beef to park-goers. Other stadiums quickly followed suit, debuting a multitude of hometown favorites to hungry crowds.

Stepping Up at Home Plate

Cincinnati’s Great American Ballpark is making a big play this year with the addition of Taste of Belgium to its concessions lineup. This local favorite will offer beloved dishes including strawberries and cream and chicken and waffles.

Also joining the roster at select games? Savory smoked meats from Mr. Red’s Smokehouse, along with all of the requisite sides.

Those looking for more traditional fare don’t need to settle for a boring old hot dog: Queen City Sausage will debut a brand-new bierwurst -- made with Local Hudy beer, of course -- to be served exclusively at Great American.

Coming Soon to a Stadium near You

Certainly, operating in a stadium or arena creates unprecedented opportunities for brand visibility. Not only are businesses pitching to a captive audience, but they have a chance to stand out from the crowd of other nondescript fare.

While contacting local stadiums directly might not get you very far, partnerships opportunities abound with the hospitality corporations charged with running concessions. And keep in mind that not every stadium may work for your product or profit margin. Generally, the more events that are held at a specific venue, the better: a multipurpose arena offers plentiful opportunities while a one sporting team stadium will see significantly less play.

One common theme among food service industry trends? Play to your strengths.

The huge potential of relocating to a nontraditional venue is only realized if you are able to execute food at a level consistent with your brand. After all, with thousands of hungry people flooding into stadiums across the country all season long, you want to be certain you can knock it out of the park.