Mouthfeel: the Science behind Why Consumers Can’t Get Enough Bacon 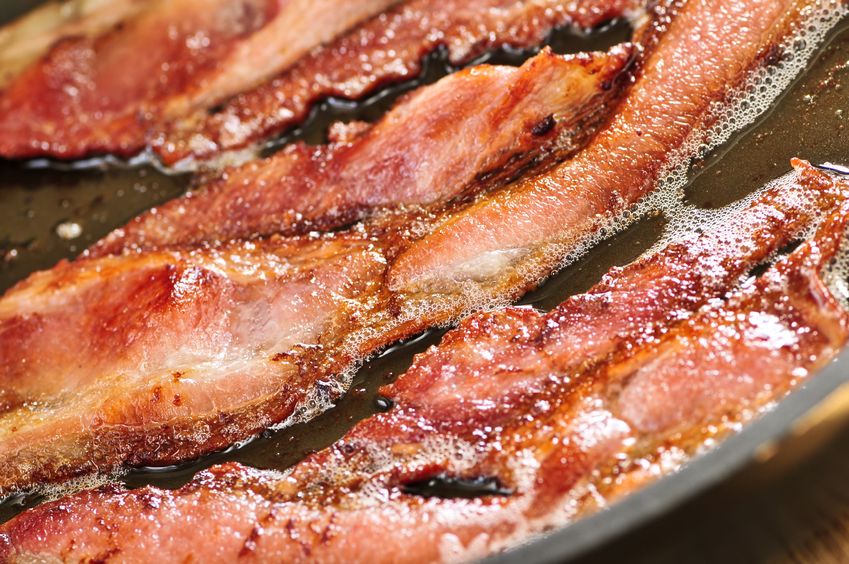 With the proliferation of bacon salad toppings, bacon burgers, bacon pizza, bacon candy, bacon ice cream, bacon-infused vodka, and more, bacon certainly isn’t just a breakfast side anymore. American consumers can’t seem to get enough bacon these days. Why the obsession? Bacon’s addictively delicious flavor profile is all thanks to the chemical makeup that’s an inherent part of the meat itself, rather than the curing, smoking, or slicing process. When fatty acids break down during the cooking process, they create a complex aroma and mouthfeel, reports The Daily Meal. It’s the reason bacon smells and tastes so delicious, and the reason we’re deep in the middle of full-on bacon-mania.

Here’s a quick primer on exactly how fatty acids inspire our love for bacon and preference for certain tastes and foods over others.

Sweet, sour, salty, bitter, and umami, meet your new friend: fat. Scientists recently confirmed that fat is the sixth basic taste. According to Rick Mattes, a professor of nutrition science at Purdue University and an author of the new taste study published in the journal Chemical Senses, the fat taste “is a sensation one would get from eating oxidized oil.” Mattes named the taste “oleogustus,” Latin for “taste for fat.”

On their own, fatty acids leave an unpleasant aftertaste—especially when consumed in high concentrations. When these fatty acids are cooked, however, they break down into a number of organic compounds that naturally complement each other: furans, aldehydes, and ketones. Furans are sweet and nutty; aldehydes are grassy; and ketones are buttery. The resulting combination is the bacon taste we love so much.

As Eater reports, however, it turns out our love for bacon is not just about the taste of these fatty acids, but also about the texture associated with eating bacon. In short, it’s all about mouthfeel—the natural synthesis that happens when we simultaneously taste, chew and experience a food’s texture. It’s that “melt in your mouth” ecstasy we experience when eating the perfect bite.

From the very first bite, texture and chewing play crucial roles in how much we enjoy food. Even if we like the taste of a dish, eating food that is too juicy, crunchy, crispy, chewy, or grainy can detract from our experience—or, in some cases, heighten it—based on individual preference. Food interacts with saliva in our mouths, lubricating the oral cavity and producing enzymes that start breaking down the food. That’s why eating a slice of bacon (or bacon-flavored ice cream or candy, for that matter) produces such a strong, pleasing experience. We love not only the taste of the fatty acids breaking down into their delicious combination of sweet, nutty, grassy and buttery flavors, but we also love the textural interplay known as mouthfeel.

Smell also plays a big role in our obsession with bacon. Bacon’s amazing aroma stems from 150 different organic compounds. As heat is applied and the sugars, acids, and fat begin to react and break down, they release the aroma we associate with bacon. On their own, these individual compounds smell pretty great; when smelled in concert however, the end result is the bacon smell we’ve come to love.

When food is processed, food manufacturers need to pay careful attention to cutting a slice that will create a pleasing texture and chewing experience. Simply imitating the flavor of bacon won’t cut it: mouthfeel matters, too. Whether you’re making bacon ice cream or bacon burgers, manufacturers need to test how consumers react to the experience of eating these foods. Just because a food tastes like bacon doesn't guarantee it will be a hit.