Toast As Art: Space-Age Food Tech for the Here and Now 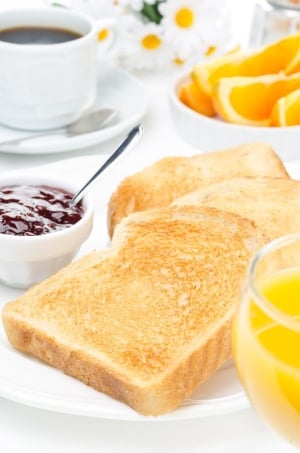 Someday in the not-so-distant future, you’ll be able to purchase packaged food at the local grocery store and not only eat what’s inside, but dine on the package as well. Edible packaging is just one of the many fascinating advances in new food technology that are transforming our relationship with food.  In today’s post, we’ll look at some of the more extraordinary inventions and innovations that food scientists have developed in laboratories around the world.

The world’s population is expected to surpass 10 billion by 2050.  In particular, much of this growth will be concentrated in major urban locations.  Both the population growth and concentration will strain our ability to efficiently grow and distribute enough food to meet projected demands.  Today’s food technologists are working on innovations that will go a long way towards meeting future food demand:

Genetically modified crops have been around for more than 20 years.

The majority of these foods are primarily commodity crops used for animal feed or processed ingredients, like corn, soybeans and sugar according to Future Tense.  But that’s beginning to change.  DuPont is working on a “high oleic” heart-healthier soybean with 20% less saturated fat than normal soybean oil.  Another company has been seeking approval for genetically-engineered salmon.  Under the brand name AquaAdvantage, this salmon matures to its full size in half the time.

Aeroponics is the process of growing plants or crops with water and air, without typical medians like soil or volcanic rock.

One of the primary benefits of using aeroponics is that the plants tend to get more oxygen and, as a result, grow much faster than traditional, soil-based plants.  Aeroponic plants are safe and ecologically sound and hold tremendous promise for a future where farmable land will be at a premium in our urban centers.

Nanotechnology is a rapidly expanding area of food technology.

Miniscule, nanoparticles appear naturally in some foods.  However, in recent years, food scientists have begun to explore the use of nanotechnology to improve the taste and texture of various food items.  Nanotechnologies true promise may come in the area of diet-foods as the particles can enhance the flavor and consistency of products without adding calories, sugar or fat.

Laboratory-grown meat has been under development for a number of years.

Otherwise known as cultured meat, it is created with actual animal cells, growing just the edible muscles and tissues.  Proponents of cultured meat say it provides the potential for eliminating the suffering of animals and also for reducing the need for antibiotics and other drugs typically used in factory farms.  The biggest barrier to market acceptance right now is the excessive cost of creating the cultured meat in a lab (in excess of $300,000 for a pound of beef).

While the aforementioned food technology advances speak to improving productivity and sustainability, innovation in packaging and distribution often addresses our desire for convenience.  And, yes, our fascination with new technology and gadgetry.

Kurukuru Nabe is a pot developed in Japan that stirs its own contents, allowing you to focus on other aspects of food preparation.

When the water in the Kurukuru Nabe gets hot enough, everything from noodles to vegetables begin to spin counterclockwise.  Since being introduced several years ago, the Nabe has become an international sensation.

Pizza vending machines have been a huge hit in Europe since being created by Italian Claudio Torghel.

The machine contains a specially developed bag of flour and a bag of mineral water.  Every time you order a pizza, the machine will start making the dough, then shape it into a crust before topping it with organic tomato sauce.  After toppings are added, the pizza is baked and ready to serve in 2 ½ minutes.  Beer is not included!

The I.C. Can is in the final stages of development and may begin to hit store shelves in the next few years.

The I.C. is a normal size soda can consisting of two compartments.  Cooling is activated by turning the base of the can which breaks the seal between the two compartments.  The patented vacuum-powered technology lowers the temperature of the liquid in minutes.  When you can’t find the cooler, the I.C. Can may be the next big thing in tailgating.

The appliance manufacturer introduced a toaster that gives people the ability to add artwork or a photographic image to their toast.  The image is pulled into the machine through a USB cable and then seared onto the bread during the toasting process.

Whether it’s edible packaging or toast as a new art form, there’s a lot happening in the world of new food technology.  We’ll keep you apprised of new developments in future posts.